This post will list the top 12 Michigan game fish species. Michigan offers anglers many excellent fishing opportunities. There are many different techniques used to catch a wide variety of freshwater game fish.

Special thanks to Christina Robinson for the great pictures! She is a serious multi-species angler in Michigan. Follow Christina on Instagram.

There are several different techniques that produce for anglers fishing in Michigan. Casting lures and live baits is the most popular technique. It can be done from a boat as well as the shoreline. Casting produces all Michigan game fish.

Bottom fishing is a fishing technique that has been around a very long time. Since many fish, walleye in particular, relate to bottom structure, bouncing a live bait or lure off the bottom can be very productive.

Trolling is a very efficient fishing technique which allows anglers to cover a lot of water in search of fish. It produces most of the salmon, lake trout, and walleye caught by Michigan anglers.

Fly fishing is a bit of a specialized technique. Many anglers associate it with stream trout fishing, and for good reason. However, anglers fly fishing will catch most species that are found in shallow water.

Ice fishing is extremely popular in Michigan! Many fish are just as active under the ice as they are in open water. Obviously, no boat is required to enjoy a productive day ice fishing.

Here is the list of top Michigan game fish species, in no particular order. Tips and top spots will be included.

Smallmouth bass are a terrific freshwater game fish! They are often associated with rivers, but are certainly found in many Michigan lakes as well. They average a pound or so but grow to over six pounds. The many bays in Lake Michigan in particular provide some of the best smallmouth bass fishing found anywhere.

Read more about smallmouth bass fishing in this article!

Anglers catch smallmouth bass on lures, live baits, and by anglers fly fishing. They can be taken through the ice as well. Smallmouth bass prefer cool, clear water. They are good to eat, but like largemouth bass, the vast majority are released to please other anglers.

Walleye are an extremely popular species, and they are second list of the top 12 Michigan game fish species. Walleye are found in many lakes and river systems. Lake Michigan and Lake Huron give up some of the largest Michigan walleye.Walleye prefer cold, clear water.

Read more about walleye fishing in this article

Walleye usually, but not always, feed on or near the bottom. Trolling is an excellent technique to locate and catch them. Live bait such as nightcrawlers, minnows, and leeches work well. While walleye are not the toughest battlers, they more than make up for it on the dinner plate! Most anglers consider walleye to be the best eating fish caught anywhere.

Northern pike are an apex predator and certainly are one of the top Michigan game fish. Pike are aggressive and are mostly taken by anglers fishing with large, flashy artificial lures. Spoons, spinners, and plugs are effective lures. However, they will certainly take live baits as well. Northern pike are most often associated with shallow weedy flats. Ice fishing for northern pike is quite popular and productive in Michigan as pike thrive in cold water. They are good to eat, but are bony and a bit difficult to clean.

Largemouth bass are probably the most popular game fish in the United States, and Michigan offers excellent fishing for them. They are next on the list of the top 12 Michigan game fish species. Tournaments have really resulted in their explosion in popularity.

Read more about largemouth bass fishing in this article!

These hard fighting fish are found in a variety of waters from small ponds to the largest lakes. Largemouth bass prefer warmer, slower moving water. Bass are aggressive predators and are caught by anglers using both lures and live baits. While decent to eat, most anglers practice catch and release.

Muskellunge, also known as “musky”, are a top predator and game fish in Michigan. They grow quite large and are one of the most challenging species to catch. Musky are called the ‘fish of 10,000 casts” for good reason. Most musky are caught by anglers casting artificial lures. They inhabit the same environments as pike, particularly shallow, weedy bays and coves. Afternoon is often the best time to catch them, especially on cloudy days. Very few musky are killed by anglers, most are released.

Crappie are next on the list of the top 12 Michigan game fish species. They do not put up a spectacular fight, all things considered. However, they are a beautiful fish that are fantastic eating. Crappie tournaments have increased their popularity. Trolling with jigs or live minnows is extremely productive. Crappie school up and once located, the bite can be fast. Crappie will bite through the ice as well.

Michigan has an excellent population of bluegill, sunfish, rock bass, and other panfish. Obviously, ultralight tackle is the best choice. Live bait probably accounts for the most fish, though lures will produce, especially for the aggressive bluegill. Worms, maggots, and crickets are top live baits. Spinners and jigs fool them as well. Ice fishing for panfish in very popular in Michigan.

Yellow perch are smaller cousins to walleye. They are a beautiful fish that put up a great fight on light tackle and are 8th on the list of top 12 Michigan game fish. Yellow perch school up in larger lakes, especially Lake Michigan. Once located, a bunch of perch can be caught in short order. Jigs and live minnows are the top producers. They prefer cool, clear water. They are a favorite of anglers ice fishing as they feed actively in cold water. Yellow perch are as good an eating fish as any that swims.

Lake trout are the largest of the trout species found in Wisconsin. In fact, they are one of the largest freshwater species in North America. Most lake trout are caught in large, deep lakes, especially the Great Lakes. Trolling is the most productive technique as it allows anglers to cover a lot of water. They put up a decent fight, though a lot of it is just their size. Ice fishing is very productive as lake trout feed actively in cold water. Smaller fish are good to eat, larger specimens are usually released.

Michigan offers anglers the opportunity to catch several other trout species; rainbow trout, brown trout, and brook trout. All can be caught through the ice as well as in open water. Brook trout are the smallest, but perhaps the most beautiful. Most Michigan brook trout are caught by anglers fishing smaller streams. Rainbow trout are probably the most recognizable fish in North America, due to the distinctive red stripe. They are heavily stocked and found throughout Michigan in streams, rivers, ponds, and lakes. Fish that move out into the Great Lakes and return to streams to spawn are called “steelhead” trout. 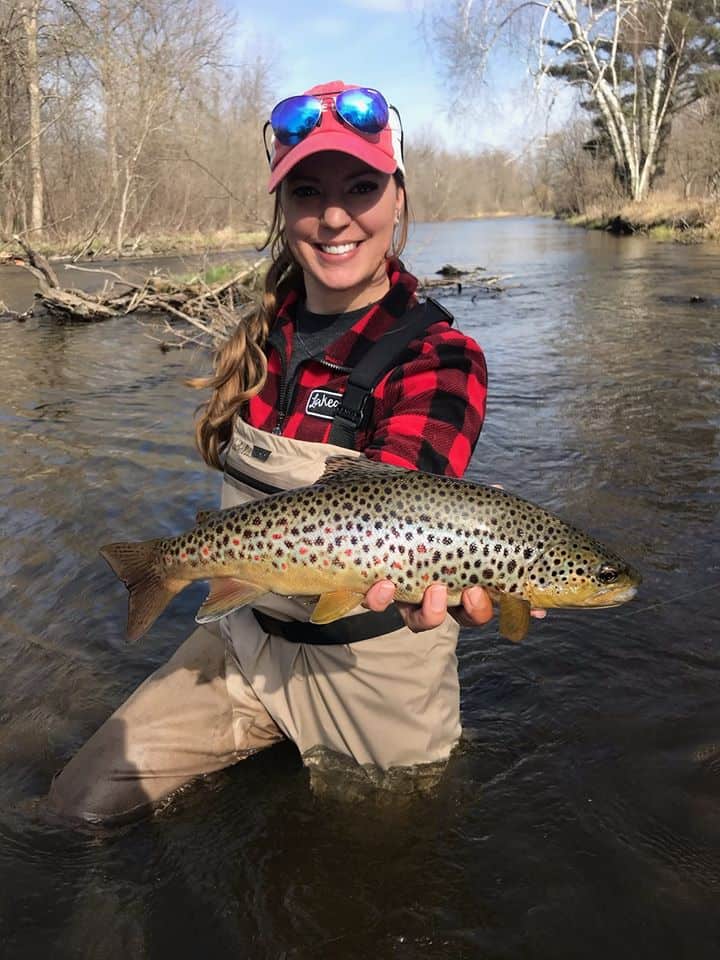 Most salmon are caught by Michigan anglers trolling in Lake Michigan and Lake Huron. In the fall, the rivers become the top spots as salmon begin their spawning migrations. Salmon populations continually fluctuate due to forage, stocking, and other factors. They are obviously highly desired due to both size and eating quality. Catfish are last on the list of top 12 Michigan game fish species. Michigan offers anglers the opportunity to catch all three of the primary North American catfish species; channel catfish, blue catfish, and flathead catfish. Most are taken by anglers fishing live or cut bait in slow moving rivers and lakes. These fish grow large, put up a great fight, and are terrific to eat!

In conclusion, this article on the top 12 Michigan game fish species will help anglers identify and catch these terrific game fish!