Anglers Sarasota mangrove snapper fishing experience action, tough battles on light tackle, and terrific eating! Mangrove snapper please anglers of all ages and skill levels on the inshore waters of Florida and beyond.

Mangrove snapper are abundant and widely distributed throughout the southern United States and the Caribbean. Snappers school up in large numbers and usually associate with structure of some sort. Many anglers bottom fish for mangrove snapper offshore. However, they are plentiful inshore as well, and are often the target of anglers seeking a meal. Anglers who would like to discuss a fishing charter can contact me at (941) 371-1390 or captklopfer@comcast.net As a full time fishing guide in Sarasota, Florida, it is my job to meet my clients expectations. Sarasota is a tourist destination and I get a lot of casual anglers. Mangrove snapper are the perfect fish for these anglers. They are quite aggressive at times, school up in good numbers, pull hard, and taste great. They are basically “saltwater panfish” with white, tasty flesh.

Light spinning tackle is the best choice for anglers targeting mangrove snapper in shallow, inshore waters. A 7 foot rod with ten pound monofilament or 20 pound braided line works well. Snapper can be fussy and bite very lightly at times. Light tackle increases sensitivity, resulting in more hook-ups. If large grouper or snook are also an option, slightly heavier tackle may be in order.

With snapper fishing, “less is more”. The lighter the rig, the more success anglers will have. Mangrove snapper have keen eyesight and can be finicky. A small hook will draw more strikes. In most instances, a #1 live bait hook or a #3/0 circle hook is perfect. Circle hooks are required when fishing in the Gulf of Mexico. Anglers should use the minimum weight required to get the bait down. A light leader should be used as well. A 24” piece of flourocarbon leader is a good choice. I live to use a “knocker rig”. This lets the sinker ride right up against the eye of the hook. This allows a snapper to pick the bait up without feeling any weight while keeping the bait right on the bottom. The sliding sinker with “knock” the hook off of most snaps, thus the name. ¼ ounce sinkers work fine in most circumstances. Strong currents may require more weight.

Most anglers go mangrove snapper fishing inshore using live or frozen bait. While snapper will take artificial lures, live bait is best in most applications. The number one bait in Florida is shrimp. Live shrimp is preferred, but plenty of snapper have fallen prey to frozen shrimp. Shrimp is available at every bait shop in Florida and the south east United States.

Live baitfish can be a very effective bait as well, particularly for anglers seeking larger fish. A 2” live pinfish or grunt will not get as many bites, but the fish will be larger. Small bait fish such as pilchards (scaled sardines), threadfin herring, and Spanish sardines are also very good baits. The same bait fish will produce presented as cut bait. Mullet and squid are both good frozen baits that can be cut into chunks or strips and fished effectively on the bottom. Passes and inlets are prime snapper fishing spots. The water is usually deeper than the flats. Also, current flow is usually present. Structure such as docks and rip rap in passes and inlets will hold snapper and other species all year long. Current can actually be too strong at times. This is particularly true on the east coast where tides are stronger. Slack tides can be the best option.

Bridges are mangrove snapper magnets! Bridges are generally in water around ten feet deep, which is perfect. They are also normally in narrow spots, which results in good tidal flow. Some bridges are also in “No Wake Zones”, resulting in less waking by passing vessels. Bridges also offer access for anglers without a boat to fish for mangrove snapper.

Oyster bars are terrific spots to locate and catch mangrove snapper. Prime bars have a steep drop off into water that is several feet deep or more. High tide just starting to fall is the best time to fish oyster bars.

Grass flats that drop off sharply are rime snapper spots as well. Here in Sarasota where I fish, there are areas that have been dredged to make fill. This resulted in shallow flats that drop off into 15 feet of water. Mangrove snapper will congregate on these edges. In the Florida Keys, there are “banks” that hold a lot of mangrove snapper. These are basically “humps” with grass that pop up in the open bays.

Anglers fishing for mangrove snapper with live or frozen bait will almost always anchor either up-current of the spot to be fished or directly over the top of it. In water ten feet deep or shallower, it is usually best to anchor a cast away from the structure. In water deeper than ten feet, vertically fishing can be the most effective presentation. 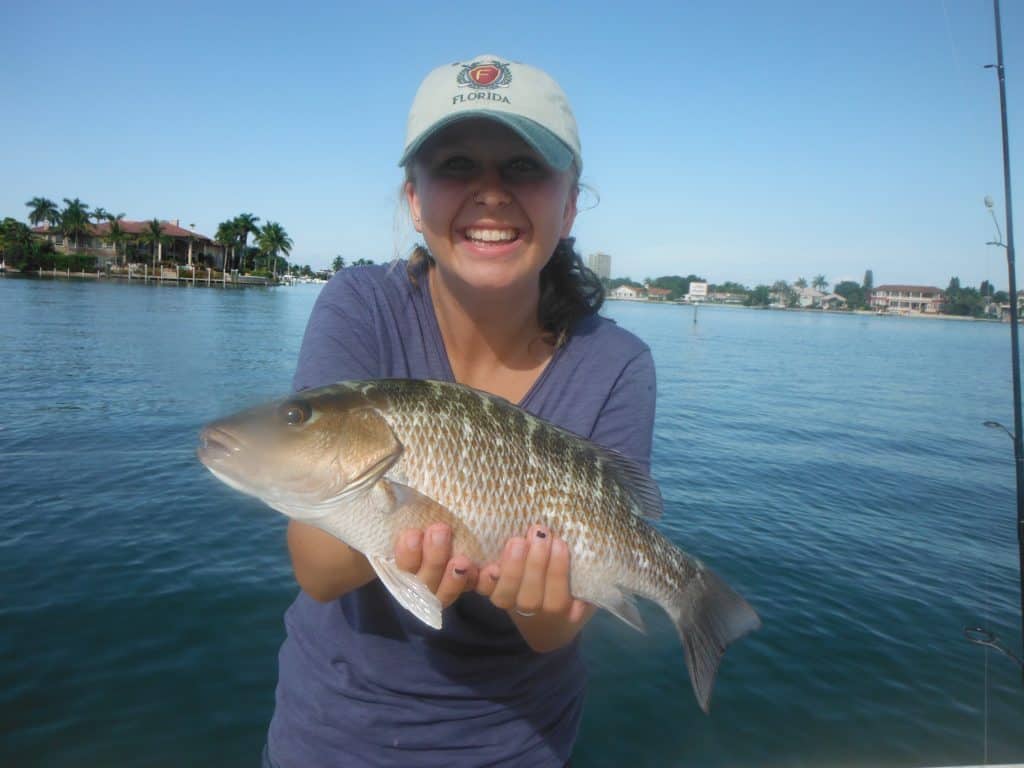 Anchoring is a skill in itself. Wind and tide must be taken into consideration when anchoring. The worst thing an angler can do it to drag the anchor through the fishing spot. This will certainly ruin the spot. Only practice and experience will give anglers the skill they need to anchor up on a spot properly.

Frozen shrimp and cut bait are fished in exactly the same manner. Frozen shrimp should be threaded onto the hook. Live baitfish work best when hooked through the lips, especially if current is present. Fish can be cut into small chunks or strips. Both methods are effective. Squid work best when cut into long strips.

One mistake many anglers make when mangrove snapper fishing inshore is trying to “set the hook”. Once the bait settles on the bottom, anglers will initially feel a “tap”. There may be several “taps”. It is crucial that the angler remain still and not move the bait at all. At some point the snapper will take the bait. The angler will see the rod tip bend steadily. The angler should simply reel quickly, removing the slack while the rod tip is raised up. If the snapper steals the bait, re-bait and try again! Chumming is widely practiced when fishing for snapper offshore. Inshore it can be used, but it must be done judiciously. Chumming in strong tides will have the opposite effect, it will disperse the snapper instead of attracting them to the boat. One technique that is deadly is to use live bait to chum on the deep grass flats. Currents are not as strong on the open flats. This requires a lot of bait, but bait fish are usually abundant in the summer and easily caught.

Sarasota has an extensive artificial reef program. Several of these reefs are within a couple miles of the beach. They hold mangrove snapper and other bottom fish. These reefs consist of concrete rubble, bridge remains, and other fish-holding structure. The three nearshore reefs are in thirty feet of water. The best approach is to anchor and fish vertically. However, when the wind and current are both light, anglers can drift the reef. Snags will become more prevalent. The reef coordinates can be found HERE.

Most of the inshore Gulf of Mexico bottom consists of sand. There are some ledges and rocky outcroppings. These are fish magnets! Small ledges that get little fishing pressure can produce for many years if fished judiciously. Once a good ledge is found, anglers should search nearby, there are usually more spots in the neighborhood.

While live bait works best, mangrove snapper will hit artificial lures. Most of the snapper that my clients catch on lures are done so while targeting other species. I use a #8 Rapala X-Rap when fishing for snook and other species. Since snapper share the same spots, they will be caught as well. The small plug closely resembles the small finger mullet and other bait fish that inhabit the inshore bays.

Jigs will also fool mangrove snapper, especially on the deep grass flats. Scented soft plastic baits can be particularly effective. My personal favorite is the 3” Gulp! Shrimp and the color really does not matter.

While I very much promote catch and release, I do not mind if clients keep a few tasty snapper for a meal. This is especially true with our resident species. These snapper are migrating out of the bays and into the open Gulf of Mexico. Snapper are delicious and can be prepared many ways. Here are a few of my favorites. They are all simple and very easy.  Florida snapper regulations are found here.

A skillet is warmed up to a pretty good temperature. Snapper fillets are dipped in melted butter or olive oil and seasoned to taste with blackening seasoning. The fillets are then cooked for 3 minutes or so on each side.

Fish have been fried for a long time! Fillets are covered in a commercial or home made coating and then fried in 350 degree oil.

Snapper are placed on a baking sheet and covered with Italian bread crumbs and placed into a 400 degree oven for 8-10 minutes.