This article will thoroughly cover rainbow trout fishing. Rainbow trout are the most abundant and popular of the three major trout species. They are adaptable and can be caught using a variety of fishing techniques.

Rainbow trout, Oncorhynchus mykiss, are one of the most recognizable North American game fish species. They are adaptable and have been successfully stocked throughout the continent. They are caught using a wide variety of angling techniques. The widespread stocking of rainbow trout has been a huge success for fish management agencies all over North America. Just about every clear and cold stream, pond, river, and lake has been successfully stocked with rainbow trout. They are fairly tolerant of a variety of water temperature ranges and thrive in a variety of environments.

Rainbow trout are often associated with cold, clear, fast-running streams, and for good reason! They are the quintessential stream fish. Rainbow trout also thrive in larger rivers, ponds, and lakes as well. As long as the water quality is good and it does not get too warm, rainbow trout will do well. They are found in Southern states such as Georgia and Arizona. These versatile game fish have quite a varied diet. They eat insects, crustaceans, and bait fish. Also, many hatchery trout are raised on commercial feed, making prepared baits very productive. Also, anglers have a lot of options as to the types of waters to fish as well as methods and techniques.

It is very important for anglers to stay up to date on the current fishing regulations in the area being fished. Streams are often heavily managed as far as taking fish, times they can be fished, and fishing methods. Some bodies of water are barbless, catch and release only. Others have limited or delayed harvest. Bait is not always allowed and some areas require single hooks.

Rainbow trout vary in size, from six in fish in tiny streams to thirty pound monsters in the Great Lakes. Therefore, there really isn’t one outfit that will cover every situation. However, since most rainbow trout caught by anglers range from one to five pounds, a light spinning rod and reel combination is the best all-round choice for fishing for these spectacular game fish.

Rainbow trout in small, clear streams require light tackle and lines. Even in ponds and larger lakes, anglers fishing with light tackle will be more productive. A 6′ to 6 ½’ light or ultralight spinning rod with a 1000 series reel spooled up with 4lb or 6lb monofilament line will serve anglers well in most applications. A quality rod and reel can be purchased for well under a hundred dollars. As mentioned above, rainbow trout can be caught using a variety of techniques. Anglers can fish with artificial lures, use live bait, or fly fish. Casting, trolling, still fishing, and even ice fishing are all productive techniques.

As mentioned above, rainbow trout can be caught using a variety of techniques. Anglers can fish with artificial lures, use live bait, or fly fish. Casting, trolling, still fishing, and even ice fishing are all productive techniques. Light spinners and spoons are the best choice in smaller streams. Lures are most effective when cast directly across the stream and worked back slowly, allowing the current to move the lure. In most cases, a slow steady retrieve works best. The take often occurs at the end of the drift, as the lure “swings” in the current. 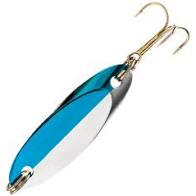 Capt Jim’s favorite spoon for rainbow trout fishing in the Acme Kastmaster spoon. It is available in many different sizes, making it effective in small streams up to trolling in large lakes. Silver and gold are good colors, along with the split color and chrome. The Worden’s Original Rooster Tail spinner is Capt Jim’s favorite spinner for trout fishing. It is especially effective when fishing streams. Due to it’s light weight, it snags less than other spinners and the blade rotates with the slightest motion. Brightly colored bodies with a gold blade are top colors.

The Rapala Husky Jerk is Capt Jim’s favorite plug when it comes to fishing for rainbow trout. Small versions can be used in streams while larger models are excellent for casting and trolling. Gold is a great all round finish.

Lures are also effective in larger rivers, whether wading or fishing from a boat. Larger spoons can be cast a long distance to cover a lot of water. Trolling also produces in larger rivers. Anglers can also cast shallow diving jerkbaits, which tend to catch larger fish.

Rainbow trout in ponds and larger lakes will certainly take artificial lures as well. Anglers can cast lures from the shore or a boat. However, most anglers fishing for trout in lakes with lures do so by trolling. This is a very efficient fishing technique which allows anglers to cover a lot of water in search of fish. Trolling allows anglers to present several lures at multiple depths in pursuit of trout. Spoons and plugs are the best trolling lures, followed closely by spinners. Plugs are handy due to the fact that they have a lip will will cause the lure to run at a determined depth, negating the use of sinkers. They are available in a myriad of sizes, colors, and running depths.

Spoons and spinners can be trolled fairly close to the surface without any weight. Fortunately, rainbow trout often feed close to the surface. A swivel should be used on the main line, followed by a 3′ leader and then the lure. This eliminates line twist. Special clip on weights can be added to get the lure deeper. Using several different weights will cover the water column better. Spinners can be trolled for rainbow trout as well. Heavier spinners will get down fairly deep on their own. One very effective rig is called a “wedding ring”. This is an inline spinner with several beads and is used in conjunction with a nightcrawler. The lure/live bait combination is extremely effective!

Anglers should experiment with speed and lures. In most situations, a fairly slow speed works fine. The lure should be let out 75-100 feet behind the boat. Points, channel edges, sunken islands, and drop-offs are all likely spots to try.

Serious anglers will use a clever device called a “downrigger”. This is usually done on larger boats and was basically invented on the Great Lakes. However, smaller portable units are available for anglers fishing in smaller boats. It uses a heavy ball on a cable with special release clips. They allow for precise depth control. Downriggers are a bit complicated, but also effective.

Fishing for rainbow trout with bait

Bait is very effective for rainbow trout, no doubt about it! In the wild, trout feed on worms, insects, minnows, crayfish, and really just about anything they can get hold of. Hatchery trout are fed commercial fish food, and anglers can purchase similar baits from Berkley, Gulp, and others.

Worms have been catch fish for a very long time. They are very effective freshwater baits and trout love them as much as most other species do. Anglers can use regular garden worms that the dig up in the yard. Nightcrawlers are extremely effective, reasonably priced, and are readily available at many retail outlets that sell fishing tackle. Worms are by far the most popular live bait for rainbow trout fishing.

Second on the list of top trout fishing bait are the list of prepared commercial baits. These are especially effective on stocked trout, which were raised on commercial feed. They are available in eggs, worms, paste, and more. Many anglers prefer bright colors such as pink and chartreuse. Larger rainbow trout feed extensively on live minnows. This is especially true in lakes, where that forage is available. Minnows are much more trouble to keep alive than are the other baits. Gulp Alive Minnow baits are an excellent substitute for live minnows. Other live baits include grasshoppers, crickets, grass shrimp, and leeches. Anglers fishing for rainbow trout with bait want it to appear as naturally as possible. In streams and other moving water, the bait is drifted with the current. A small hook, #8 is a good all-round size. Anglers can use a small spit shot of needed to get down or a float to suspend the bait up off the bottom. Eggs are used a lot in larger rivers where salmon spawn.

Bait is used quite often in stocked ponds, especially smaller bodies of water where boats are not allowed. It can be used in conjunction with basic bottom fishing rigs, a split shot, free lined, or fished under a float. The prepared bait works well on these stocked trout, as does nightcrawlers. Live bait also works well for anglers ice fishing for rainbow trout. 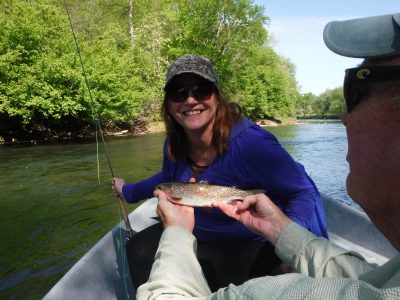 Fly fishing for trout is a very complicated subject. Many books have been written on the subject and it will be briefly covered in this article. The primary difference in fly fishing versus spin fishing is that in fly fishing the line provides the weight for casting. Flies weigh practically nothing and would be impossible to cast. Rainbow trout thrive and feed in cold water. Consequently, anglers do well ice fishing for rainbow trout. This is mostly done in lakes, mainly due to safety issues. Trout will often be caught very high in the water column, even in deep water. These fish are cruising for food, so most anglers set up and wait for them.

Both artificial lures and live bait are both effective methods used to catch rainbow trout through the ice. Spoons are very productive since rainbow trout, especially larger fish, feed on live bait fish. Live minnows will catch them as well. Nightcrawlers can be used either alone or in conjunction with lures.

Rainbow trout on the dinner plate While rainbow trout are a gorgeous fish that fights hard and leaps high out of the water when hooked, many anglers fish for them because they consider trout to be fantastic to eat. This is especially true for wild fish, as opposed to stocked fish. Pan fried rainbow trout are a favorite preparation for many anglers. They are also good fried, baked, and broiled.

Rainbow trout do have a line of pin bones running the length of their shoulder. On smaller fish, these bones will often cook down. On larger fish, the bones should be cut out or removed with tweezers. Rainbow trout can be ‘butterflied” as well, which is a bit tricky but results in an impressive presentation.

In conclusion, this article on rainbow trout fishing will help anglers catch more of these terrific freshwater game fish!