This post will list the top 10 northern pike fishing lures. Northern pike are apex predators. They are among the largest and most sought after freshwater game fish. Northern pike grow very large. The world record is 55 pounds! Fish to 20 pounds are caught regularly. Pike are aggressive and most are caught by anglers using artificial lures. They want a substantial meal and feed on smaller fish, amphibians, birds, and mammals! Northern pike are ambush predators. One close look at them reveals how they feed. Pike blend in perfectly around weeds and submerged vegetation. They are long and easily slither through grass and weeds. Using their large mouth and sharp teeth, pike pounce on yellow perch, suckers, panfish, and other small fish. Pike also feed on small mammals and amphibians on the surface. They will hold on rocks and other structure in deeper water. Northern pike are a cold water species. They are found in the northern part of the United States, much of Canada, and colder regions in Europe. Northern pike do not get affected by cold water and feed all winter long. This makes them prime candidates for anglers fishing through the ice. Anglers can read more about ice fishing for northern pike in this article. 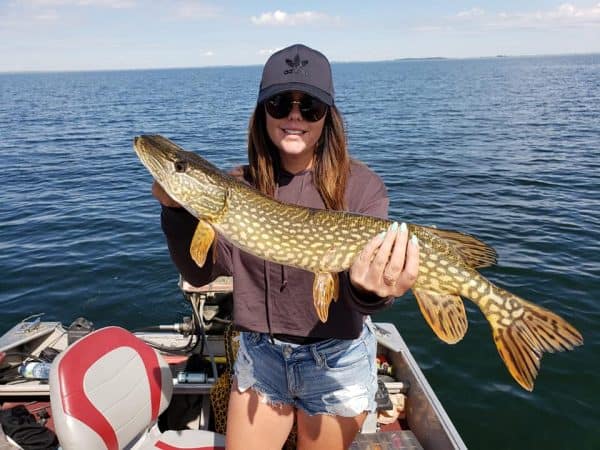 A good spinning combination would be a 7 foot or 7 ½ foot medium heavy rod with a fast action. This means that the rod has a stiff butt section but a limber tip. This allows anglers to cast the lures a long way, but still has the ability to fight a big fish. It can be paired with a 4000 series reel. Bait casting combinations are similar.

Most anglers opt for braided line when pike fishing. It has a smaller diameter, resulting in longer casts. It also offers more abrasion resistance. Braided line has no stretch, resulting in a firm hook set. Most anglers use a 12” steel leader to prevent norther pike from cutting the line with their sharp teeth. These leaders also have swivels, which are required when using spoons.

The Eppinger Daredevil spoon is a legendary bait. It tops the list of the top 10 northern pike fishing lures. A spoon is basically a curved piece of metal with a hook in it. Spoons are heavy and cast well. They put out a lot of flash and vibration. The one ounce size is excellent for northern pike fishing. The time tested red and white and “five of diamonds” are excellent choices. Spoons are easy to use, making them and excellent choice for novice anglers. The Daredevil spoon is cast out, allowed to sink, then retrieved back in. A steady retrieve usually produces, though anglers can mix it up with some twitches and pauses. It has an exposed hook and works great fished over submerged weeds and along weed edges. It can be both cast and trolled.

Anglers can click this link to shop Amazon for Daredevil spoons

The best spinnerbait on the marker for northern pike is by far the Booyah Pikee Spinnerbait. It is large, puts out a ton of flash and vibration, and is quite durable. Chartreuse is a good color choice, but every anglers has his or her favorite pattern. Spinnerbaits are fairly weedless and can be fished through fairly heavy weeds and cover. The Pikee spinnerbait can be fished through the entire water column. It works well buzzed just under the surface or slow rolled close to the bottom. In most cases, a steady retrieve works best. However, anglers should vary that retrieve until a productive one emerges. Pike can be very aggressive,m but sometimes a slower retrieve works best.

Anglers can click this link to shop Amazon for Pikee spinnerbaits

The Rapala Shad Rap in the #14 size is a terrific northern pike fishing lure, hitting number three on the list. It is a versatile bait that can be cast as well as trolled. It is probably the top bait used by anglers trolling for pike. Sexy shad and yellow perch are top patterns. This bait floats at rest and dives down eight feet or so on the retrieve. It has a wider profile and runs deeper than other jerk baits. It is a great choice for fishiung deeper grass beds and areas of rocky bottom. The Shad Rap allows anglers to cover a lot of water whether casting or trolling.

While named the “musky Killer”, this inline spinner by Mepps is a terrific northern pike lure. Mepps is THE name when it comes to spinners. This bait is large and will attract large pike. It is very easy to use, anglers simply cast it out and reel it back in. The blade puts out a lot of flash and vibration. These baits come in a variety of colors. The most popular lure in the gold blade with a brown and orange tail dressing. This has been proven over decades to be an effective lure. It may fool any musky that might be in the area as well. Frogs can be worked through sparse vegetation, but will hang up in heavy weeds. It can be trolled slowly in open water as well.

Northern pike feed on amphibians as well, mostly frogs. The Livetarget Floating frog is an excellent frog bait. It can be worked on the surfaced through very thick vegetation. It puts up a fair commotion which will draw pike up from deeper water. In most cases, expansive shallow weed beds in the warmer months are the best places and times to fish it. The LiveTarget Frog is an exciting bait to fish! Strikes are explosive and often times the fish will miss it. The bait can be worked off of the tops of lily pads and other vegetation. Most strikes will occur in the open spots. It also works well when algae covers the surface. For the most part, this bait works best in the warmer months.

The Rapala Skitter Prop is a topwater plug. It is number 6 on the list of top 10 northern pike fishing lures. Since northern pike are fairly aggressive, noisy topwater baits work best. The Skitter Prop has a propeller on the rear that puts out a lot of commotion. It comes in a variety of colors, with frog being a good pattern for northern pike.

The lure is cast out towards shoreline cover, weed edges, or over submerged vegetation. It is allowed to settle, then is twitched sharply. It is again allowed to sit and then the process is repeated. At times, a fast, steady retrieve will produce. It is important to wait until the fish is felt on the line as opposed to striking on the visual strike. This can be difficult as strikes are often explosive!

The Johnson Silver Minnow is a weedless spoon with decades of tradition as a productive fishing lure. It will fool northern pike and most other freshwater species as well. While termed “Silver Minnow”, most pike anglers choose the ¾ ounce spoon I a gold finish. It is weedless and an excellent choice in heavy vegetation. This bait is virtually weedless, though it will load up with moss. It is very easy to use. Most anglers cast it out and reel it back in. It has a great built in wobbling action. It can be hopped on the top of pads as well. Many anglers add a plastic trailer to increase the action and profile of the bait.

The Kastmaster can be cast out and retrieved, just like all spoons. They come in many new colors, but the silver or gold finish with a little strip on neon works great. It is a great choice in cooler weather when pike move deeper. Vertically jigging, both in open water and through the ice will produce pike.

Anglers can click this link to shop Amazon for Kastmaster spoons

The Rapala Husky Jerk in the #14 size is an excellent northern pike fishing lure. It is a large, heavy bait. It floats on the surface and dives down a few feet upon the retrieve. This is a “jerk bait” and is worked in an aggressive manner. Yellow perch, gold, and firetiger are top color patterns for pike.

The bait is cast out and then retrieved back in using sharp, aggressive twitches. However, it is very important to put slack in the line after a hard twitch. This will cause the bait to hang there in the water column, motionless. This drives fish crazy and is often times when they strike.

Northern pike will certainly hit a swim bait as well. The Bass Assassin Die Dapper has a large profile. The paddle tail puts out a steady thump and vibration. These baits can be rigged weedless to work through heavy weeds. Colors vary, but bright colors that match perch often work well.

In most cases, the Bass Assassin Die Dapper works best using a slow, steady retrieve. It is an excellent choice when pike are not as active and respond to a more subtle presentation. Winter and post cold front conditions are great examples of this.