Fishing the North Shore of Minnesota

This article will focus on fishing the North Shore of Minnesota. This area offers fantastic fishing for a variety of species. Several species of salmon and trout are taken year round. Bass, walleye, northern pike and other species are landed as well.

The North Shore of Lake Superior offers anglers some terrific fishing opportunities! Lake Superior is the largest freshwater lake in the world. The famous Boundary Waters is a short drive to the north. Many streams and smaller lakes in the area are productive as well. Despite the fact that Lake Superior is huge, anglers do not need a boat to be successful. Anglers fishing from shore and wading are very productive! Our expert for this article is Kiera Manderfeld. She lives in Duluth and is an outstanding and enthusiastic angler! She works with North Shore Guide Service to help other anglers enjoy this unique experience. Along with fishing the North Shore of Minnesota, they offer trips to the famous Bois Brule River in Wisconsin.

She is also apart of an association called “Minnesota Steelheader”, which is a group of volunteers around Minnesota who get together to teach new and experienced anglers from around the states. She is generous enough to take the time to share her experience and knowledge with other anglers.

My name is Kiera Manderfeld and I’m from Duluth, Minnesota. As many know, Minnesota has 4 seasons and I happen to love fishing during all of them. I do multiple forms of fishing. Anything from walleye, Bass and northern to rainbow trout, brook trout, lake trout, and steelhead. I enjoy using spinning gear, but I also love fly fishing as well.

I grew up in Minnesota & I’ve been fishing ever since I could remember. I’ve been fishing along the North Shore for a few years now. You think you know it all until one day, you happen to learn something new. Each day is a learning process whether you’re an experienced angler or not. The list goes on and I enjoy hooking into all species.  I do not ice fish, if I do then it’s very rarely. I focus on rivers and streams during the Summer, Spring and Fall then I focus on shore casting along the shores of Lake Superior during the winter time.

North Shore Guide Service focuses on fish species along the North Shore in the rivers & off the shores on Lake Superior. Those fish species are Steelhead, Brook Trout, Kamloops, & Coho salmon. We also guide the Wisconsin Bois Brule River. Aaron Gerlovich & Jamie Cotner are the owners of the guide service. I’m the assistant manager, so I go out on guide trips with them when they have two or more people to guide.

Steelhead fishing on the North Shore Fall & Spring are normally drifting with mono on a fly rod in the rivers along the North Shore for Steelhead, a native Minnesota trout. I use my Sage X Fly Rod with my Hatch 7 Fly Reel with mono line drifting an egg, which duplicates another steelhead spawn. Steelhead are aggressive during spawning season so they’ll go after any egg floating down stream to eliminate competition. They push up river during spawning season which is spring time in Minnesota. Steelhead also push up river during Fall as well, for food. I’ll fish any river starting from Duluth, MN leading up to the Canadian border during the Spring & Fall seasons. Anglers choosing to employ spinning tackle will do well with a medium-light, fast action rod with any preferable spinning reel, such as a Shimano Stradic, or whichever the angler prefers. You can also use the same set-up that you do on a fly rod which is mono line with an egg or any classic sinking fly to drift along the current of the rivers.

Summer is a great time of year to fly fish for brook trout in the rivers along the North Shore of Minnesota. I also fly fish off shore or off of a boat for Bass, Northern, Walleye, & whatever else that will take a bite at my fly. 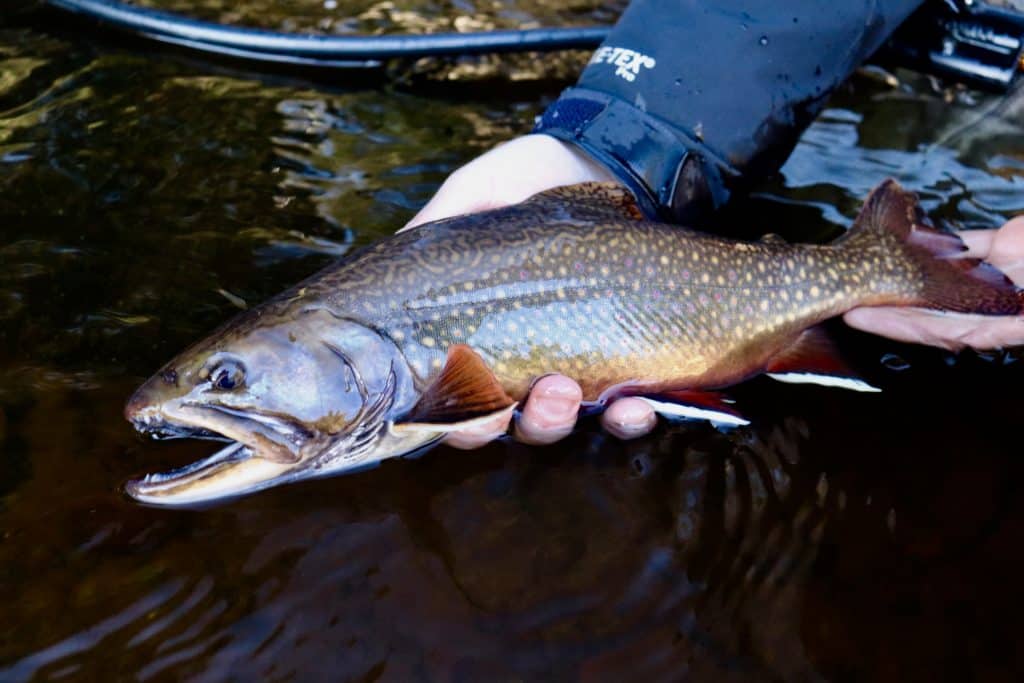 Brook Trout are in the rivers at all times so it’s hard to not hook into a few while out searching for another species of fish. I catch these on my Sage X Fly Rod & Hatch 7 Reel while using a dry yarn egg fly. It floats along the top of the river current, duplicating an egg or a bug.

Spin fishing is productive in rivers and streams in summer as well. The primary species that anglers can catch are brook trout, rainbow trout, and the occasional brown trout, but those are not very common in Minnesota. The best all round outfit for this is a 9 foot rod with a 6 pound leader followed by an 8 pound line. Top lures are anything from a sinking egg, a Wooly Bugger, or usually any type of sinking fly that you prefer using. Minnesota offers excellent fishing for northern pike and smallmouth bass in the summer. I strip a streamer fly on top water during the summer time in any lake around Minnesota to catch pike, since they’re stocked everywhere. Smallmouth bass are found a bit deeper in the water column. I use a sinking leader connected to my floating fly line. I drift a black or green Wooly Bugger fly along the river current or I’ll strip a streamer on still lake water. Any color combinations starting from Red and White to Black and Blue or whichever the fish seem to bite on.

“Smallmouth bass can certainly be taken on light spinning gear as well. Small spinners and a 1/8 ounce black or rootbeer jig works well. Small Rapala plugs are effective, also. Smallmouth feed on small bait fish but they love crawfish! Any lure that resembles a crawfish or minnow will produce smallmouth. Anglers targeting northern pike will need slightly heavier tackle. Medium action rods with 15 pound monofilament or 20 pound braided line will do well. Pike are larger and are often caught near vegetation and structure. Heavier tackle is required to cast the larger lures and get the fish out of the weeds. The best lures are spoons, topwater plugs, and Marabou Spinners.

Pink Salmon are caught during the fall in the rivers during their spawning season. They are often caught using a fly rod with 6-8 pound monofilament line and drifting a yarn fly in the river current. These fish don’t eat during their spawning season because they use all of their energy to run up rivers to spawn. It is difficult to get them to take a fly. You keep drifting until they’re upset enough to attack whatever is coming their way to get rid of competition. Once they spawn, they slowly die off. Kamloop is a non-native rainbow trout. I target these in the winter time, employing the same tactics that I use while trying to catch Coho Salmon. However, these fish can’t be found in the rivers, only in Lake Superior. I’ll throw out a bobber with a homemade jig bug that I tied about 100 yards out from shore, about 3-5 feet down, if I’m shore casting for these fish. Any bug pattern works for these fish. Anything from straight black to a color combination of blue, gold, and white. Lake trout are caught near the bottom of Lake Superior anywhere from 50ft deep of water out to about 200ft+ of water. These are also caught trolling Rapala plugs behind a boat. We use 10 foot med-heavy weight Okuma rod and reels with a 10-12 pound line when trolling for lake trout. The best plugs are 5-6” with any color combination starting from silver and blue to orange, white, and green.

Winter fishing on the North Shore

Winter is for shore casting off the shores of Lake Superior in Minnesota. Kamloop are the target species, but Coho Salmon and Lake Trout may be caught as well. I use my 12 foot G Loomis Rod with my Shimano Stradic spinning reel, throwing 1-2” silver or orange and gold spoons off shore for shore casting. These fellows aren’t picky, they will much on anything. I will also troll out on the boat on Lake Superior, if the landings aren’t frozen. You can catch coho, Kamloop, and Lake Trout trolling a 6-8” Rapala plug, any color combination of choice, way out behind the boat. I let out at least 250ft of line on Lake Superior in 50ft of water to over 200 feet of water, using the same rod and reel set up as trolling Kamloop. Best trolling speed is between 2-4 MPH.

Coho can also be caught in several rivers along the North Shore using the drifting method with mono & a classic bug on a Fly Rod or spinning gear. They’re in their mature spawning stage with their dark spawning colors.

Lakes on the North Shore

Lake Superior is a huge body of water, offering any angler a large variety of areas to fish. Another Lake in Minnesota is Island Lake. A large lake that produces a large amount of northern and walleye. Grand Lake is another wonderful lake as well. Big Lake is a top favorite for Northern Pike and Bass.

Crescent Lake: Fish for walleye, smallmouth bass and an occasional muskie from this pier. An accessible campsite is adjacent to the pier.

Sawbill Lake: Cast for walleyes and enjoy the view of the lake.

White Pine Lake: Try for walleye or northern at dawn or dusk.

Mink Lake: Catch splake and rainbow trout off the pier.

Stony Point is a short drive north of Duluth. A wonderful shore casting area. Another great spot is in front of the French River, off the rocky beach. The McQuade Harbor is a perfect spot for new anglers who are just learning how to shore cast.

RIVERS – There’s many rivers along the North Shore. Highway 61 leads up to the Canadian border and every river branches off of that route. The Baptism River is a larger bodied river that produces many fish species. Similar to the Minnesota Brule, it offers a wide variety of areas to explore along the river side.

Gooseberry River is a beautiful scenic area with many smaller brook trout and rainbow trout as well.

The Cascade River is a well producing river with a wonderful scene. There’s many rivers starting from Duluth heading all the way up to the Canadian border! Anglers Can get information about fishing regulations at the Minnesota DNR site.