Fishing with Jigs in Freshwater – a Complete Guide

This article will thoroughly cover fishing with jigs in freshwater. Jigs were the first artificial lure used by man to fool a fish. They continue to be productive to this day. Fishing with jigs in freshwater can be extremely productive. A jig is a hook with a weighted head and some type of body or tail. The weight adds casting weight while action giving the lure action in the water. The tail or dressing can be hair, rubber, or plastic.

Jigs are simple but extremely versatile and effective fishing lures. They will catch every freshwater game fish species. Jigs can be used in every fishing situation; casting, trolling, vertical fishing, and ice fishing. They can mimic every type of forage that game fish feed on. There are two basic types of freshwater fishing jigs; skirted or dressed jigs and the jig and grub. Skirted jigs have the skirt or hair permanently attached to the jig head. Skirts are usually rubber and have terrific action in the water. Both natural and synthetic hair are used as dressing as well. Bucktail and marabou are both widely used natural dressings. Synthetic hair is also used and has the benefit of being durable. The jig and grub combination is the second type of freshwater fishing jig. With this system the jig head is used in conjunction with some type of soft plastic body. This is a very versatile arrangement as it allows anglers to quickly and easily change the tail to switch up color, size, and action. These lures are also quite economical. Tube jigs fall into this category as well.

Grub bodies are available in a wide variety of sizes, shapes, and colors. Twister tail grubs are very effective and put out a lot of action with little movement. Shad tail grubs realistically imitate a swimming bait fish. Paddle tail grubs fall erratically after being twitched sharply. Some grubs resemble creatures and even things that do not exist. However, they will all catch fish when presented properly.

Anglers jig fishing in freshwater can even combine the two jig types! Some jigs offer the option of using a soft plastic trailer with a hair or skirted jig. Bass anglers employ this technique often. The trailer adds bulk and action. This works very well when trolling jigs for striped bass and other species.

Fishing for panfish and crappie with jigs Jigs are fantastic fishing lures for panfish! They will catch every panfish species, especially large bluegill. There is no doubt that the jig is the best crappie lure as well. Both of these species are aggressive and feed on minnows. Jigs realistically mimic bait fish along with crustaceans and other forage.

Obviously, panfish are small and therefore a small jig should be used when targeting them. Fortunately, anglers jig fishing in freshwater have a myriad of options to choose from. 1/16 ounce is a good all-round size, but anglers often go much smaller. The jig and grub system is tough to beat for chasing panfish. Anglers can purchase kits for a very reasonable price that has a good assortment of jig heads and bodies. Hair jigs also produce for anglers jig fishing in freshwater for crappie and panfish. Marabou jigs have been catching these diminutive game fish for decades. Panfish often react better to a less aggressive presentation. Marabou “breathes” in the water and puts out a great action with very little movement. This is perfect for panfish.

Anglers can cast, vertically jig, troll, and even ice fish with jigs for panfish. These tiny jigs are very light. Therefore, ultralight tackle with 4 lb line is the best rod and reel to use. Anglers can swim a jig over submerged vegetation and along weed lines. Submerged timber is always a good spot to try, especially for bluegill. In most cases, a very slow, steady retrieve works best. Bridges are also good spots to try for crappie and panfish. The best approach is to fish vertically close to the bridge pilings. These fish will often be suspended, so anglers should start at the bottom and work up towards the surface. This same technique works well when fishing deeper structure and submerged trees. Fish will often school in the tops of the trees.

Trolling is a very effective technique that anglers jig fishing in freshwater can use to locate schools of panfish. Tiny jigs can be trolled slowly weed weed edges, over submerged vegetation, and along structure breaks. Serious crappie anglers have refined this technique and do very well trolling jigs. They often add a live minnow to make them even more attractive.

Flipping docks is another productive technique that anglers fishing for crappie and panfish use successfully. The idea it to get the jig back in the shade as far as possible. Some anglers use a “bow and arrow” cast to accomplish this. The jig usually gets hit as it falls through the water column. There is another family of jigs for anglers targeting largemouth bass and smallmouth bass. These come in a wide variety of shapes and colors as well. These are stout jigs with strong hooks. Most have rubber legs and many employ a weed guard. The head is designed to swim through weeds and over structure. Anglers can use bass fishing jigs in both shallow and deep water. They crawl over than through most cover and vegetation. Heavy models are used to “punch” through thick matted cover. They produce when pitched under docks as well. Swim jigs are an excellent choice to fish over submerged vegetation like hydrilla.

The jig and grub does has a place in bass fishing, especially for smallmouth bass. Tube baits in particular are very effective on them. Smallies are often found in more open water around gravel points and submerged rocks. A jig and grub or tube bounced along the bottom resembles a fleeing crayfish, prime smallmouth forage. Shad tail grubs are productive on suspended bass of all species. A black 1/8 ounce jig head with a 2” to 3” green or orange curly tail grub is an outstanding river smallmouth lure as well. Striped bass are a saltwater species that have been introduced into large freshwater lakes. They are thriving in this environment! Stripers in saltwater love white bucktail jigs, and freshwater striped bass do as well. They mimic the larger shad and herring that they feed on.

Anglers troll jigs for striped bass with great success. Special rigs called umbrella rigs are used to troll multiple baits at once. Trolling is an excellent method to locate and catch open water fish that move around a lot. 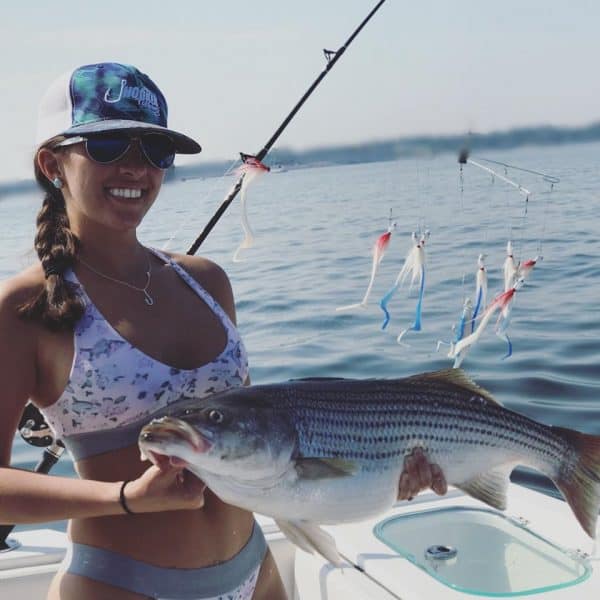 Jigs can be vertically fished as well. This works great once fish are located. Bait schools will often relate to structure edges and cover. This will in turn attract the game fish. I white bucktail jig jerked sharply and allowed to flutter down realistically imitates a wounded herring or shad. A strip of cut bait can be used to sweeten the offering.

Walleye fishing with jigs in freshwater Anglers freshwater fishing with jigs often target walleye. These very popular freshwater game fish usually feed on or near the bottom. A curly tail, shad tail, or hair jig bounced along the bottom from a drifting boat is a deadly technique. Some jigs will be lost to bottom structure, but it is usually worth it to fish right where the walleye live.

Casting and drift fishing jigs will certainly produce walleye as well. This is especially true in shallow water and rivers. Points and weed beds in 10′ to 20′ of water are top spots. River walleye will school up in the deeper holes. Often times, walleye anglers add live bait to the jig. A minnow or crawler can really make a big difference on a tough day.

Trout anglers often overlook jigs, and this is a mistake. Spoons, plugs, and spinners are certainly productive, but jigs will catch plenty of trout as well. Jigs are used regularly by anglers ice fishing for trout. Smaller curly tail jigs will produce in streams. Larger jigs will catch big brown and rainbow trout as well as lake trout. Trout species in lakes are often found higher in the water column than most other species. Swimming or trolling a jig 5′ to 10′ under the surface will produce trout. Anglers can also use a bare jig head to present a live bait to bottom feeding trout.

Most species with be caught fishing with jigs

While several species have been listed in this article, the reality is that every predator game fish will take a jig. Musky, northern pike, white bass, and even channel catfish will take a well presented bait. This is especially true if natural bait is added to the hook.

In conclusion, this article on fishing with jigs in freshwater will encourage anglers use these productive lures!