This post will thoroughly cover fishing charters in Sarasota Bay. Sarasota Bay is a fairly diverse fishery. It is twelve miles long and three miles wide. Sarasota Bay is just south of Tampa Bay. It is fairly developed as Sarasota and Siesta Key is a very popular tourist destination. However, Sarasota Bay offers anglers some excellent fishing opportunities.

Sarasota Bay has a couple of different personalities. North of the passes, Sarasota Bay consists mostly of submerged grass beds, we call these “grass flats” This grass attracts the forage that game fish feed on. There are also some oyster bars and mangrove shorelines. Several creeks feed Sarasota Bay.

The grass pretty much disappears south of Big Sarasota Pass. The bay becomes more of an estuary, where mangrove shorelines and oyster bars dominate the environment. Man made structures such as docks and residential canals also hold fish. I run fishing charters in Sarasota and have been doing so since 1991. The vast majority of my fishing is done in Sarasota Bay and the two passes that connect it with the Gulf of Mexico. It offers diverse fishing with seasonal migrations. Understanding these local migrations and changing conditions is the key to angling success in Sarasota Bay.

There are several different techniques that I use on fishing charters in Sarasota Bay. These include drifting the deep grass flats, fishing the passes, working the bars and flats, and fishing creeks and canals. All of these techniques are productive, depending on the time of year and conditions.

I run my fishing charters in Sarasota Bay in a 21 ½ foot Stott Craft bay boat. It is stable with a lot of open cockpit and deck space, making it a versatile boat for the fishing that I do. It is not great in rough water, but I seldom venture out into the Gulf of Mexico, unless it is nice and calm.

I use light spinning tackle on the vast majority of my fishing charters in Sarasota Bay. Spinning tackle is the best choice for several reasons. It is easier for inexperienced anglers and children to use, for sure. Also, most of the lures and baits that I use are fairly light. Therefore, spinning tackle handles these lighter baits and lures much easier than bait casting tackle does. I am getting more and more anglers who are into fly fishing as well. Just about any fish that takes and artificial lure can be caught on fly. I use an 8wt rod and reel with an intermediate sink tip line most of the time. A weighted bait fish pattern such as a Clouser Minnow is a good all-around choice.

Both live bait and artificial lures are used on my fishing charters in Sarasota Bay. One aspect that makes for a good fishing guide is the ability to adapt the trip to the expectations and skill levels of the client’s. I prefer using artificial lures as a are fun to fish in very productive. However, I will certainly by shrimp or use my cast net and catch bait if I think that is the best option to catch fish on that particular trip. 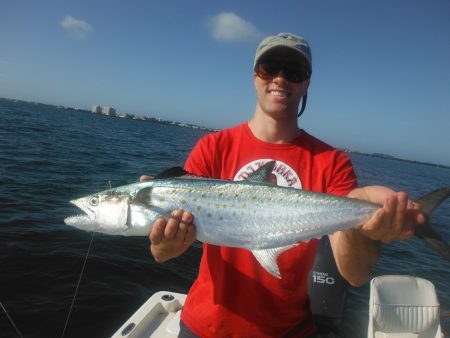 There are some fabulous grass flats in North Sarasota Bay! These are large areas that cover several acres or more. The flats off of Buttonwood Harbor, Bishop’s Point, and Stephen’s Point all are top spots that I fish often on my fishing charters in Sarasota Bay. This is especially true in the warmer months. In the winter, these areas get churned up as they are exposed to the wind.

I normally drift these spots. As the wind and tide move the boat along, anglers cast lures and live baits. Jigs are the top lures with plugs and spoons also being effective. Live bait is productive as well, with a shrimp being the top bait. Speckled trout are the top species, with Spanish mackerel, bluefish, ladyfish, jacks, snapper, pompano and other species being caught.

Wind is a major factor when drifting the deep grass flats in the open portions of Sarasota Bay. Often times, wind will dictate where to fish. On breezy days, half of Sarasota Bay may be too rough to fish. Also, the ideal approach is to choose a flat where the wind and tide move the boat in the same direction.

There are also plenty of oyster bars and flats in North Sarasota Bay as well. Long Bar in particular is an excellent fishing spot. It is a shallow bar the nearly crosses the entire bay. Expansive shallow flats north of Long Bar are terrific for redfish and snook. Also, nice flats exist on the west side near Buttonwood and Whale Key. There are several creeks that flow into Sarasota Bay north of Siesta Drive Bridge. These are Hudson Bayou, Whittaker Bayou, and Bowlees Creek. All three are fairly short, which makes them easy to fish. Bowlees Creek has three separate little sections or entrances. All have oyster bars and islands near the mouth.

Residential canals are plentiful in the North Sarasota Bay section that I fish. One canal runs almost the entire east side of Longboat Key. Canals are numerous in Bird Key as well.

I fish these areas on my fishing charters in Sarasota Bay. For the most part, I do this in winter and the cooler months. This is when snook, jack crevalle, and other species migrate into these creeks and canals. The water is usually several degrees warmer with plenty of glass minnows and mullet to feed on.

I almost always use artificial lures in these areas. Lures allow my anglers to cover a lot of water in search of fish. My favorite lure is the Rapala X-Rap jerkbait. It is easy to fish and draws a lot of strikes. It can be trolled effectively as well. A 5” white Gulp Jerk Shad on a jig head would be my second choice.

Sarasota Bay changes south of Siesta Dr., Bridge. This area is much more dominated by oyster bars and mangrove shorelines than it is by submerged grass flats. In fact, the lack of grass beds is a growing concern. This area is better for snook, redfish and jacks than it is for spotted sea trout, Spanish mackerel, and bluefish. The abundant oyster bars and mangrove shorelines make this a good place to fish with artificial lures on fishing charters in Sarasota Bay. Lures allow anglers to cover much more water than they can when using live bait. My favorite artificial lures are a gold weedless spoon, Rapala X-Rap, and a soft plastic bait on a jig head or swim bait hook.

The cooler months are better times to fish this part of Sarasota Bay. In the summer time the area gets a lot of rain which results in the balance being too much freshwater as opposed to saltwater. It also becomes quite warm. Many of the snook are out in the passes and out on the beaches anyway.

Anglers will find large numbers of ladyfish at times in this area. On a low tide, they will stack up in the deeper water of the channel. Anglers can catch them by bouncing jigs on the bottom. Pompano and spotted sea trout can be caught on the flats on the higher tide stages. Docks are plentiful in this area and anglers fishing with a large live shrimp can catch sheepshead, drum, snook, and redfish.

Phillippi Creek dumps into Sarasota Bay in this area as well. This is one of my favorite fishing spots! Jacks are very reliable in the cooler months from the mouth of the creek all the way up to Bee Ridge Road. Snook can be caught as well, though many of them are small. Still, there is always a chance for a nice. At times, juvenile tarpon can be caught in there as well.

Passes are productive on fishing charters in Sarasota Bay

One of my favorite spots to fish on a fishing charter in Sarasota Bay is the passes. Passes are basically inlets which connect the Gulf of Mexico to Sarasota Bay. There are two fairly large passes, Big Sarasota Pass and New Pass. Both are similar yet have distinctly different features.

Some of the deepest water in Sarasota Bay is to be found in the passes, close to 30 feet deep. This is due to the strong current gouging out a channel or hole. Also, structure is plentiful in the form of docks, rocks, seawalls, submerged alleges, and in the case of New Pass, a bridge. This structure holds a variety of fish including sheepshead, snook, snapper, pompano, and other species. Drifting the passes while bouncing a jig on the bottom is an extremely productive technique that I use often on fishing charters in Sarasota Bay. This is an easy technique for any angler to quickly master and is a great option with kids and inexperienced anglers. As the boat drifts along, the jig is bounced off the bottom, fooling ladyfish, pompano, mackerel, jacks, and other species.

Often times baitfish are plentiful in the passes. This along with structure and current flow are just some of the reasons that these are excellent fishing spots. I encounter Spanish mackerel, bluefish, and ladyfish gorging on these baitfish on the surface sometimes. This is great fun as just about any lure or bait cast in will draw a strike. Trolling plugs in the passes will help locate them when they are not showing on the surface.

In conclusion, this article on fishing charters in Sarasota Bay will help anglers understand the diverse environments along with the multiple species and techniques used in this West Florida fishery.