This article will list 13 productive crankbaits. Crankbaits are in the family of “plugs”. They are effective and versatile lures. Most crankbaits are made from plastic these days, though hand carved wooden crankbaits are available at a higher price. Most crankbaits have a plastic lip on the front. This lip determines the action that the crankbait has as well as the depth that it will dive to. Once the bait reached that certain depth, it will pretty much stay at that depth. The shape of the body also affects the action. Traditional crankbaits are wide and fat while jerkbaits are long and slender.

Capt Jim Klopfer is a fishing guide in Sarasota, Florida. He has fished all over North America and particularly enjoys casting plugs; crankbaits in particular. There are many quality crankbaits on the market, these are his personal favorite lures. There are many different crankbaits that anglers can fish with. In fact, it can be overwhelming. Also, these lures are not inexpensive. This list of Capt Jim’s favorite crankbaits will help anglers in their selection.

The best 13 crankbaits are;

This selection of 13 productive crankbaits will cover every fishing situation that an angler requiring a crankbait will encounter. In most cases, baitcasting tackle is preferred for crankbait fishing. Spinning tackle is versatile and works fine for casting smaller, lighter cdrankbaits. However, the faster retrieve ratios and extra power that baitcasting outfits provide make them a better choice. Also, baitcasting reels better handle the slack line that is created when fishing with crankbaits.

Most veteran crankbait anglers prefer a slower, or softer rod. This helps when hooking the fish as well as keeping it in. Fish can shake the hook a bit easier with crankbaits than they can with a big worm hook. 7′ to 7 1/2′ is a good length. While all crankbaits are similar, there are several different variations to them. These are traditional crankbaits, jerkbaits, lipless crankbaits, and trolling crankbaits. Each will be described briefly.

Read more about fishing with lures Jerkbaits are long and slender. They are worked aggressively and put out a lot of flash as they wobble from side to side. Jerkbaits are used extensively by anglers fishing in saltwater as well. Snook, striped bass, bluefish, mackerel, and other species will hit them. The aggressive action appeals to saltwater fish. They can be cast or trolled.

Read more about jerkbait fishing in this article by Capt Jim Lipless crankbaits do not have a lip which determines the depth that they run. The angler controls the depth bu allowing it to sink longer. The line tie is on the top. Lipless crankbaits put out a steady vibration and rattle. They are great for covering a lot of water and will draw a reflex strike. They are not usually trolled as unlike most crankbaits, they will sink if the boat is stopped.

Read more about lipless crankbaits in this article by Capt Jim Certain crankbaits are designed to be trolled. They are often a bit too large to cast and are a bit of a mix between a jerkbait and a traditional crankbait. They can obtain depths of 30 feet or more without a downrigger or weights. Many anglers consider the Rapala Shad Rap to be the best running crankbait on the market. It is a versatile bait that sets the standard. The Rapala Shad Rap is first on the list of the best 13 crankbait fishing lures. It is effective when both cast and trolled. It is available in 34 colors in six sizes. The larger Super Shad Rap is a favorite among pike and musky anglers as well. There is also a deep diving model available. 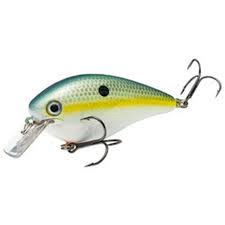 The Strike King KVD Squarebill crankbait was designed by tournament bass angler Kevin VanDam and is next on the list of the best 13 crankbait fishing lures. It is designed to be fished in shallow water around cover. The design of the bill causes a very erratic action and it tends to bounce off of structure as opposed to hanging up. The 1.5 size is very popular and anglers can choose from 56 colors. It is available without rattles and in a deep diving version. It is almost always cast and retrieved. The Rebel Crawfish series crankbait is the original crankbait designed to specifically mimic a fleeing crawfish. It had a very erratic action. The Rebel Crawfish is legendary among river smallmouth bass anglers, but it will catch just about every freshwater species. It is available in 3 sizes that cover various depths and 10 colors, with natural patterns being preferred in most situations. The Bomber Model A is an old school crankbait that continues to produces bass and other species. It is an affordable bait that comes in 6 sizes and a couple dozen colors. It can be both cast and trolled.

The discussion of lipless crankbaits begins and ends with the Bill Lewis Rat-LTrap. There are other fine baits out there, but this is the best. It is available in 4 sizes and over 100 colors! It is a great search bait that mimics shad and other bait fish. Saltwater anglers use them on snook and striped bass. Chrome with a blue back is a great all-round color pattern. It is fifth on the list of the best 13 crankbait fishing lures. The Rapala DT series, which stands for “down to” is a premium bait made from balsa wood. They were designed by bass pro David Fritts. It is available in six sizes and 32 colors. They dive to the determined depth and run at that depth very consistently. Rapala DT baits are effective both cast and trolled. The Cotton Cordell Big O is the lure that started it all. Originally carved from balsa wood and sold by the dozen in egg cartons, there was nothing like them. Named after legendary Lake Okeechobee, these lures remain effective to this day. They are available in 3 sizes and a dozen colors. A new squarebill model has been recently added. Big O baits are seventh on the list of the best 13 crankbait fishing lures.

The Rapala X-Rap Extreme Action Slashbait is Capt Jim’s favorite jerkbait. It comes in both freshwater and saltwater versions in X different sizes and many color options. They produce a wide variety of fish species in both freshwater and saltwater, from small panfish to giant snook and striped bass. X Raps are suspending baits that can be cast or trolled and are available in shallow and deep diving versions.

The Storm Wiggle Wart is another affordable, old school crankbait. It only comes in one size, but it appeals to a lot of different species. Anglers can choose from 36 different colors. It is often cast and retrieved but is also very popular among anglers who troll for trout, walleye, and other species. The Yo-Zuri Crystal Minnow is another high quality jerkbait. It is available in shallow and deep diving models and both floating and suspending versions. Yo-Zuri lures are known for their terrific finishes. They are popular among saltwater anglers as well as those fishing freshwater lakes and rivers.

The Berkley Flicker Shad is another affordable, basic crankbait. It has a classic design and has a great built in action. It is available in two sizes and 8 colors. They are designed to cast well but are also quite effective when trolled. Reef Runner lures are extremely popular trolling lures used by anglers up north. It is very effective on walleye, lake trout, and even salmon. They are available in 8 sizes and many different color patterns. The 800 size can dive as deep as 30 feet on it’s own!

The Mann’s Stretch Series revolutionized shallow water grouper fishing when they were first introduced. It is last, but certainly not least, on the list of the best 13 crankbait fishing lures. These lures are sturdy and dive down to depths of up to 50 feet on their own. Sizes are available from 15 feet divers to 50 feet divers in a variety of colors. These lures are strictly used for trolling as they are large and cumbersome to cast.