What is the Best Sarasota Fishing Charter?

Anglers visiting the Sarasota area and desiring to do some fishing have a lot of options. They can go it alone or hire a local charter captain. There are a lot of fine captains to choose from. However, there is one guide that is the best Sarasota fishing charter.

One of the primary challenges that any charter boat captain faces is adapting the fishing charter to the expectations and proficiency level of his clients. Added other factors such as the current bite as well as weather and water conditions, and there are a lot of factors that go into deciding how and where to fish. Capt. Jim takes all of these into account, giving more credence to him being the best Sarasota fishing charter.

Every charter boat captain also has to choose the best boat for his or her area of operation, clients, and fishing techniques used. Taking all of these into account, Capt. Jim chose a 2106 Stott Craft Bay boat. This is a very functional vessel a flat bottom and a bit of a raised bow. The result is a very stable craft with a lot of storage and cockpit space that will also run reasonably dry when faced with a bit of a chop. Capt. Jim runs virtually all of his Sarasota fishing charters in Sarasota Bay. It is a very diverse estuary with many different fishing options. There is almost always someplace to get out of the wind, at least at speeds below 20 kn. There is a fair amount of boat traffic in Sarasota Bay, resulting in some wave action. A boat this size is perfect for dealing with that while still getting shallow water to fish.

As mentioned above, catering the clients to the goals of a fishing charter in Sarasota is the primary challenge Capt. Jim and other fishing guides face. Nothing levels the playing field like to use of live bait. This is especially true with children and inexperienced anglers. In most cases, the bait does the work of attracting the fish. The angler only has to set the hook and reel the fish in!

The top live bait in Sarasota by far is shrimp. Live shrimp are available at every bait shop in Florida. They are a versatile bait and everything eats them. Capt. Jim likes to refer to shrimp as the nightcrawler of saltwater due to this fact. Shrimp can be used in a variety of ways to catch a variety of game fish species.

The technique that Capt. Jim uses most often is to free line a live shrimp. This simply means hooking the shrimp and tossing it out using little or no weight. This allows the shrimp to swim naturally throughout the entire water column. It is extremely effective in a variety of situations, including the deep grass flats, inshore Gulf of Mexico, and around docks and other structure. 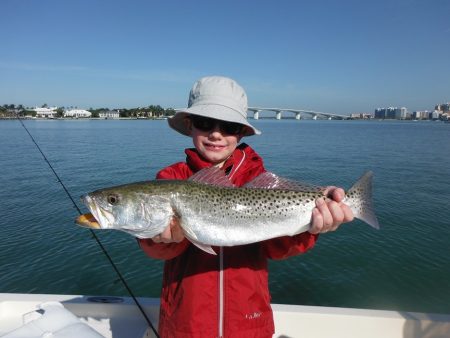 In water that is not quite as deep, Capt. Jim will often fish a live shrimp under a float. These floats are actually used to attract game fish to the bait. They are called popping corks as they make a loud distinct noise when twitched sharply. This is an extremely effective technique on grass flats in 4 feet to 6 feet of water for speckled trout in particular.

Live bait fish are also used on a Sarasota fishing charter. This is especially true in the summer. In the warmer months, hordes of small silvery bait fish flood the shallow flats particularly near the passes. Capt. Jim is a cast net to capture hundreds of these little fish. The boat is then anchored in a likely spot and the bait is used as chum to attract game fish up behind the boat. Hooked baits are then cast out and it usually doesn’t take long before a speckled trout, Spanish mackerel, bluefish, ladyfish, Jack, snapper, or other game fish species is hooked. This is a very effective fishing technique and it is not uncommon for a crew to catch over 100 fish in a fast morning. It is hot in the summer, though anglers need to get out there at first light and be done by late morning.

Fishing in Sarasota with artificial lures

Anglers are often surprised to learn how effective artificial lures are on a Sarasota fishing charter. There are times when lures are actually much more productive than live bait. Lures have the advantages of being able to cover a lot of water in search of fish as well as eliciting strikes from fish that are not necessarily feeding. Also, artificial lures are fun to fish as anglers are constantly engaged. Finally, there is the satisfaction of pulling a fish on something that is not real.

The number one lure that Capt. Jim uses on the best Sarasota fishing charter is the jig and grub combination. He uses a 1/4 ounce jig head in conjunction with some type of soft plastic grub body. The jig head provides the wait for casting as well as a hook and also produces the action for which the lure gets its name. When jerked sharply, the lure rises up and then fall seductively through the water column. Most bites occur on the fall. There are two grub bodies that Capt. Jim uses on his Sarasota fishing charters. These are a 4” Bass Assassin Sea Shad bait and a 3” Gulp Shrimp. The Bass Assassin bait has a shad style tail which produces action and vibration in the water. Is an excellent choice for covering a lot of water and when fish are active. The Gulp shrimp has the advantage of being scented which can spell the difference on a day when the fish are a bit more reluctant to bite.

There are several other artificial lures Capt. Jim likes as well. Plugs are very effective and can be both cast and trolled. The Rapala X-Rap jerkbait is his favorite plug. It is a versatile lure that realistically matches the locally available forage. It will catch just about every game fish from snook and jacks in the backcountry Spanish mackerel and spotted sea trout in the open waters.

Spoons are another very effective artificial lure that produces fish for clients on Sarasota fishing charters. Spoons are dense and can be cast a long way, which can be an advantage in clear water. They are also extremely effective when trolled and produce both Spanish and king mackerel. Silver is the top color as it matches the shiny bait fish found in Sarasota.

There are a variety of fishing techniques that Capt Jim uses on his charters. These include drift fishing, casting lures, trolling, and bottom fishing. As for basic techniques will produce every species that anglers will encounter on a Sarasota fishing charter.

Drift fishing is a very effective and efficient technique. The primary advantage is that anglers are constantly moving in search of fish. The predominant force is when, the tide can definitely be a factor especially in the passes. As anglers drift with the current, baits can be deployed in a variety of fashions.

When drifting the passes, Capt. Jim likes to vertically fish with a lead head jig. As the boat moves along, the jig is bounced sharply up off the bottom and then allowed to fall. Each time it does this, a little puff of sand is kicked up which very realistically imitates a fleeing crab or shrimp. This is also a very easy technique for novice anglers as no casting is required. Live baits can be free lined out behind a drifting boat as well. Is most often done with live shrimp and it is effective both on the flats and in the passes. Once again, it is a very easy technique for novice anglers and children. Capt. Jim will sometimes have to make a cast for the angler, but that it is a simple matter of holding on to the rod and waiting for a bite.

Artificial lures are often used when drift fishing as well, particularly when drifting the deeper grass flats. The jig and grub combination is extremely effective for this type of fishing. Most species will take it and it is an easy lure to learn to use, even for those anglers without a lot of experience.

Casting lures is Capt. Jim’s favorite way to fish and is something he employs often, especially with experienced anglers, on a Sarasota fishing charter. There is a definite satisfaction that comes from fishing this way. Part of the fun is the challenge of making a good cast and then the expectation of a strike upon retrieval.

As mentioned above, artificial lures allow anglers to cover a lot of water. They also will cause a fish to strike when it is not necessarily feeding. Game fish will strike a lore out of irritation, excitement, instinct, and for other reasons. Also, when fish are really biting well, anglers do not lose the time required to read bait a hook when using live bait.

Trolling is a very effective angling technique that has been around for a long time. It basically involves moving the boat along at a slow speed while pulling lures or even live baits behind. The beauty of trolling is that it allows for multiple lures to be presented at various depths all at once. There are several species which react well to trolling. These are fish that basically swim in the upper part of the water column and are quite aggressive. In Sarasota, these include Spanish mackerel, king mackerel, ladyfish, bluefish, and jacks. Spotted sea trout and other species will be caught at times as well.

Bottom fishing is perhaps the oldest form of fishing. In its simplest form it involves using some type of weight to lower a baited hook to the bottom. Live bait is usually used, but Capt. Jim will also use frozen shrimp on the best Sarasota fishing charter, particularly when fishing for sheepshead in the winter. Bottom fishing is an outstanding technique that produces a variety of fish and is something any angler can do.

In conclusion, this article on the best Sarasota fishing charter will help anglers decide to go fishing with Capt. Jim!