The Best Fishing Bait for Channel Catfish are Nightcrawlers! Anglers have been fishing successfully with live worms for a very long time. There is evidence to support that they were the first live bait used on a hook. While worms are not really all that abundant in the water, for whatever reason just about every freshwater game fish species will readily take them.

Nightcrawlers are even better than regular worms due to their size. A large live nightcrawler puts out a lot of scent as well as action as it wiggles seductively on the hook. Nightcrawlers represent a substantial meal as well. Finally, nightcrawlers have excellent action along with a great scent and taste. It is no wonder that they are the best fishing bait for channel catfish!

The tackle that anglers fishing for channel catfish will use is dependent on a couple of factors. The primary factor is the size of the fish being pursued. Channel catfish are the most numerous of the catfish species, but there also the smallest. In general, channel catfish average 3 to 5 pounds. However, larger specimens are certainly a possibility. Water depth and current are the other two primary factors when it comes to choosing the best channel catfish fishing tackle. Many anglers pursue channel catfish in rivers, and for good reason. Rivers are a primary habitat for channel catfish. Obviously, deeper swifter rivers will require heavier tackle than will rivers that are more shallow with less current flow.

Both medium spinning tackle and bait casting tackle are both excellent choices when it comes to fishing for channel catfish. Anglers fishing from shore who need to make long cast will probably do better with spinning outfit. However, skilled anglers can certainly do well with conventional tackle. The best spinning outfit would be a 7 foot to 8 foot rod with a medium action and a 4000-5000 series reel. Most anglers opt for braided line due to its thin diameter and strength. 20 pound to 30 pound braid works well. Anglers choosing to fish with a conventional or bait casting outfit will do well to to something similar. A 7 foot to 8 foot rod with a stout butt section and a limber tip and matching real spooled up with 30 pound to 50 pound braided line is an excellent all round choice. This works especially well for anglers fishing from boats, where long casts are not a requirement. Bait casting tackle is also a better choice were larger fish are a possibility, such as in a tailwater.

Click to shop Amazon for a medium conventional outfit

There are many different choices when it comes to hooks when fishing with live bait for catfish. Many anglers have turned to circle hooks as they tend to end up in the mouth of the fish, thus reducing mortality rates. Other anglers still prefer to use “J” hooks. There really is no wrong answer, it is just a matter of angler preference. 2/0 “J” hooks and 5/0 circle hooks are good all-around size is when fishing for average sized channel catfish. While channel catfish are most often found on or near the bottom, there are several different ways to present a live nightcrawler to them. The most commonly used rig would be the sliding sinker rig, also known as a Carolina rig. This consists of a sinker with a hole in the center, which the running line slides through. A swivel is then tied on, which not only stops the sinker but facilitates use of a leader. A short leader is used between the swivel and the hook. This rig allows catfish to pick up the bait and move off a bit without feeling the weight of the sinker. Is a very effective rig for catfish and just about any other bottom feeding species. Many anglers opt for special flat catfish sinkers which sit on the bottom and do not roll. These are also known as “no roll” sinkers, for obvious reasons. Channel catfish will also feed a bit above the bottom. In these situations, anglers do well with a high low rig, also known as a spreader rig or chicken rig. With this rig anglers can present multiple baits at varying depths above the bottom. Most anglers limit this to two or three hooks at most, as it becomes cumbersome after that. A couple of hooks are tied on the mainline a foot or so apart with a sinker at the bottom. Bank sinkers are most often used. This is a very popular rigs for anglers fishing for catfish in rivers from shore as well as docks and bridges. Channel catfish will be found quite shallow at times, which surprises some anglers. This is especially true at night. Fallen trees and other structure as well as flats and drop-offs will be prime spots to catch channel catfish. Fishing a nightcrawler under a float can be a very effective presentation during these times. This is a simple as adding a float or bomber three or 4 feet above the hook. Often times a small split shot is used just above the hook to get the nightcrawler down into the water column. When the float disappears, it is fish on! While the best fishing bait for channel catfish is a nightcrawler, there are plenty of other effective baits as well. These include shrimp, fresh cut bait, livers, live minnows, prepared baits, and more. Some anglers swear by soap as bait! Channel catfish will eat just about anything at one time or another. Fresh cut bait is a very effective bait for channel catfish and other catfish species. It is best to use a bait fish that has just been caught in the local waters. These include shad, herring, suckers, pin fish, and more. These baits can be cut into fillets, but are more often used as chunks. These chunks, or plugs, tend to stay on the hook a little longer. It is important to check local regulations before using any fresh caught fish to as bait. Shrimp are another very effective bait for channel catfish. Fresh or frozen shrimp are easy to obtain at any grocery store. They stay on the hook pretty well and put out a lot of scent in the water. The one downfall to using shrimp is bait is the cost, it is a bit more than most other baits. However, some experienced channel catfish anglers swear by them. Fresh grass shrimp are terrific, but are a bit more involved to catch and use. 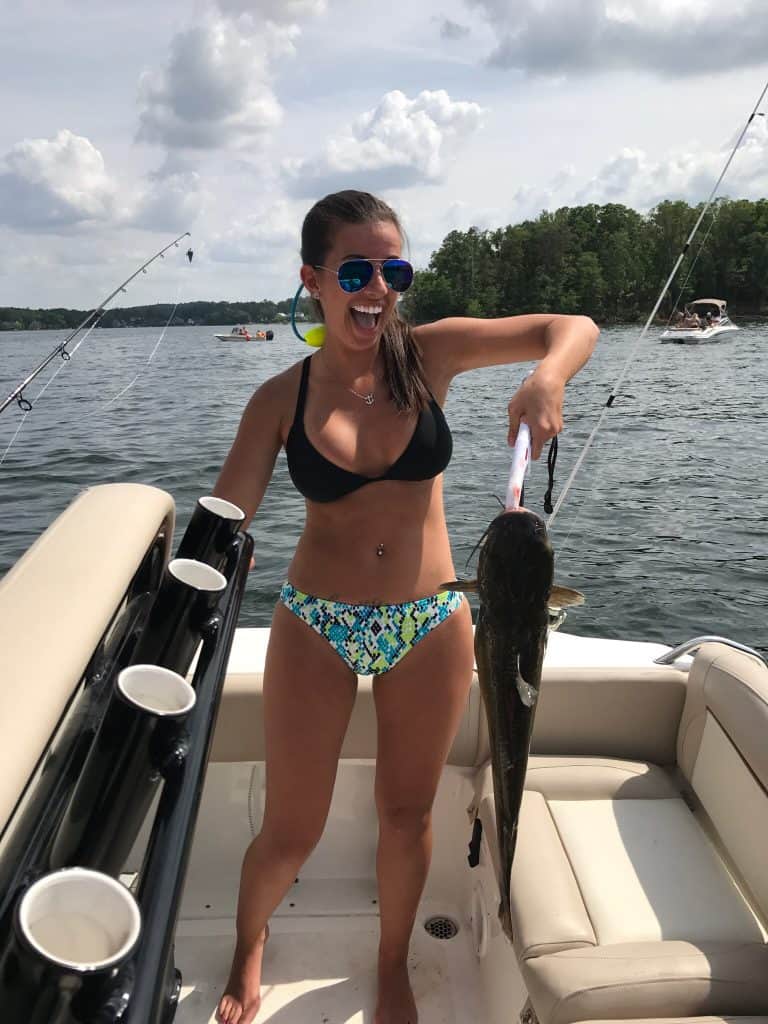 Chicken livers are another inexpensive and easy to obtain bait when fishing for channel catfish. They are available at just about any grocery store. One downside to using chicken livers is that they do not stay on the hook all that well. Pork liver can actually be a better choice as it is a bit fattier and stays on the hook longer. This is particularly important for anglers making long casts from the banks of rivers and lakes. There is a misconception the channel catfish are just scavengers who feet off the bottom. This is not true! Catfish are predators and will just assume prefer a nice lively bait such as a nightcrawler over a rotting piece of fish on the bottom. For this reason, live minnows are another good catfish bait. Minnows are a bit more difficult to keep alive as anglers have to use a bucket with an aerator. Also, anglers may have to catch their own live minnows. However, they are very effective bait for channel catfish fished on the bottom or under a float. There are many different commercially prepared baits available to catfish anglers. These are very effective and also quite convenient. Most of them can be stored and tackle boxes for an extended period of time. This makes an impromptu catfish fishing trip much easier. In most cases, they are some type of paste a can be formed into a ball around the hook. The one drawback is that some of these baits do not stay on the hook as long, especially when River fishing in current.

In conclusion, this article on the best fishing bait for channel catfish will help anglers catch more of these hard fighting and tasty game fish!