This article will discuss the best bait for shark fishing. Many anglers enjoy fishing for sharks. Most sharks are caught on the bottom by anglers using cut bait. However, in order to be successful, the best, freshest bait should be used. There are a lot of choices for those shark fishing.

The best bait for shark fishing is any fresh local fish that is bloody and oily. Top examples would be bluefish, bonita, menhaden, sardines, spot, mullet, jacks, and mackerel. The reality is that the best bait for shark fishing varies by location. Each area of the country has forage species that sharks feed on. Generally speaking, the bloodier and oilier the bait, the better! In warmer the best baits for shark fishing include Spanish mackerel, false albacore, tuna, jack crevalle, mullet, ladyfish, threadfin herring, bluefish, and more. In reality, any fresh caught fish can be cut up and used effectively as bait. However, the above mentioned baits work best overall. Also, these are not game fish and can be harvested and used as bait.

Many of these fish work well as shark bait all along the east coast of the United States as well. Jacks, tuna, false albacore, mackerel, bluefish, and mullet are the preferred baits. Shark fishing is popular for anglers both surf fishing and fishing from boats all along the mid Atlantic. As we move north, the best baits for shark fishing change a little. Cold water species such as Boston (or tinker) mackerel, bluefish, herring, and various tuna species become more effective baits. This is mostly true for west coast anglers as well. The Pacific waters are cold, tuna and mackerel are the top shark baits.

How to get fresh shark bait

Anglers have several options when it comes to acquiring the fresh bait they need to go shark fishing. Make no mistake; fresh bait is far superior to frozen bait! Successful shark anglers take the time to get the bait they need. 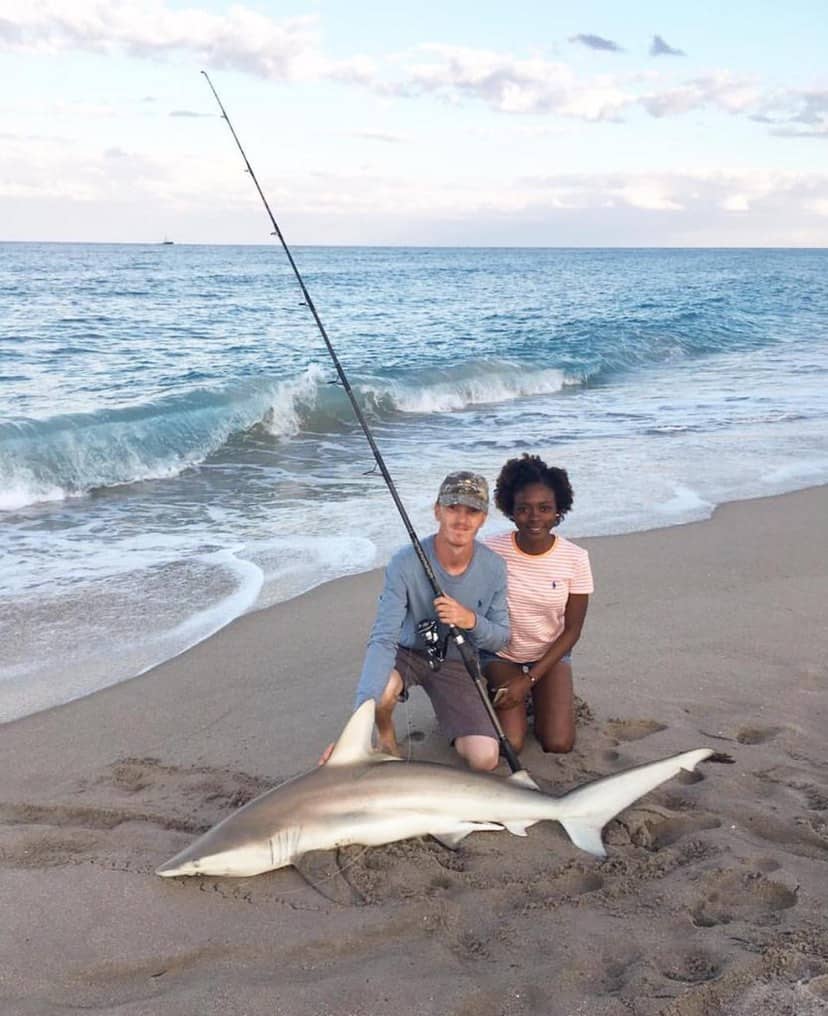 In most cases, anglers catch their own bait and then cut them up fresh. The good news is that this can be great fun! Many of the best bait species are actually great sport on light tackle. Jack crevalle, ladyfish, bluefish, and mackerel can all be caught on artificial lures such as silver spoons and jigs. This gives the shark angler something fun to do while waiting for the big one to bite!

Cast nets can also provide anglers with fresh shark bait. Mullet, herring, and sardines will usually not bite hooks. Cast nets are an effective method to take bait quickly and effectively. Also, enough excess bait is caught to be used as chum, too. Small fish can be caught with a simple bottom fishing rig. A two hook dropper rig baited with shrimp or pieces of squid will catch spot, whiting, and other species that are fine for bait. In face, one approach many anglers take is to “fun” fish for smaller fish while soaking a heavy rig for sharks. This is especially true when surf fishing.

Cleaning stations are great places to get some excellent fresh bait for shark fishing. This is particularly true when tuna are running. Anglers will have a ton of scrap meat that is great for shark fishing. The white belly strips in particular are terrific baits! Oily fish such as tuna and mackerel are preferred, as the scent disperses in the water better. However, sharks really are not fussy. They can be caught on just about any cut bait.

Chum can be used when shark fishing

Chum is very effective when it comes to shark fishing. Sharks have a very keen sense of smell and a little bit can really make a difference. Anglers can use the standard blocks of fresh or frozen chum. Chumming is mostly done from a drifting or anchored boat. The cut bait floats back in the chum slick, and hopefully a shark will find it in short order. One other technique that anglers can use it to make use of the fish that was caught for bait. This is especially true for larger bait fish such as jacks, mackerel, and false albacore. These fish can easily be tied off to a cleat on the stern, allowing the blood and other juices to disperse in the water. The carcasses can be shaken once in a while to add more scent. This is a very good method to make use of the entire fish. Both larger fish and smaller ones can also be chopped up into small pieces and tossed overboard.

While the majority of anglers use fresh cut bait for shark fishing, live bait can be extremely effective as well. This is particularly true when big bait balls or schools are present. Sharks will linger on the edge of the bait school looking to pick off stragglers. These baits can be caught with a cast net or a gold hook or Sibiki rig. Anglers fishing with live bait for sharks usually free line the bait. This involves hooking the bait and allowing it to swim naturally. The hook will cause the bait to swim in an injured and erratic manner. This can be an extremely effective technique.

Tackle and rigging for shark fishing

For the most part, shark fishing is pretty basic. Anglers will normally use some type of steel leader to prevent the shark from cutting through the line with it’s razor sharp teeth. A weight of some type is generally used to keep the bait on the bottom. This is where the majority of sharks feed.

It is important to treat sharks with respect! They are terrific game fish and should be treated as such. Anglers should practice conservation and only keep a shark to eat when a meal is desired. Sharks breed and grow slowly. They should be handles carefully and if not being kept released immediately.

In conclusion, this article on the best bait for shark fishing should help anglers catch more sharks!